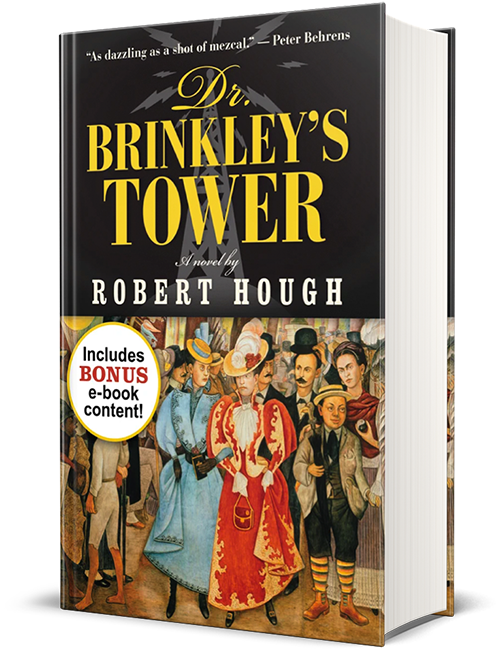 The year is 1931, and the only successful business in the Mexican border town of Corazón de la Fuente is a brothel in which every girl is named Maria. Enter Dr. Romulus Brinkley, inventor of a ‘goat-gland operation’ that, he claims, cures male impotence. When Brinkley decides to build a gargantuan new radio tower to broadcast his services, he chooses none other than Corazón de la Fuente for its site.

The town’s fortunes change overnight, though not all to the good – as word of the town’s new prosperity spreads, Corazón is overrun with desperados and mercenaries itching to reopen old wounds. Worst of all, Dr. Brinkley has attracted the attention of the town’s most beautiful citizen, one Violeta Cruz. Tired of such indignities, Violeta’s spurned fiancé, a young man named Francisco, forms an unlikely alliance with several other disgruntled townsfolk, including an octogenarian Cassanova, a brooding Spanish nobleman, an impotent bar own, and the much feared village witch. Together, they enact a radical plot to drive Brinkley away.

Brinkley is a larger-than-life character, oozing American entrepreneurial spirit in a way that is simultaneously entertaining and disgusting. Ironically, he’s somewhat at the periphery of this novel, for Hough centers his work in the sleepy Mexican town of Corazón de la Fuente, where we meet the sweet and hapless Francisco Ramirez. He's besotted with Violeta Cruz, a village coquette, though Brinkley eventually seduces her away from Francisco by giving her a job at his radio station. Along the way we meet a variety of small-town characters, like cantina owner Carlos Hernandez, who develops a problem with impotence; Madame Félix, owner of the local bordello, "The House of Gentlemanly Pleasures"; and Miguel Orozco, the mayor of Corazón de la Fuente, who senses Brinkley chipping away at his political power. Hough manages to take all of these characters beyond stereotypes and invest them with humanity and humor.